For weeks, the markets have been tossed and turned by news about the trade dispute with China. Both sides have raised tariffs on the other. China even blocked the NBA from airing in the country after an ill-received tweet from the owner of the Houston Rockets.

The head of China’s delegation, Vice Premier Liu He, said that key issues such as subsidies are off the table.

Then, this past Monday, the U.S. Commerce Department made it illegal for eight Chinese companies and 20 Chinese government agencies to do business with American firms. Chinese surveillance technology and AI companies were especially hit hard, as they rely on American parts.

This was followed up by several Chinese officials being placed under visa restrictions, making it impossible for them to travel to the U.S.

Which brings us to yesterday, when China’s trade delegation arrived in Washington, D.C., for the first high-level trade talks since July.

That was until Presidential tweets on Thursday and Friday sent the markets kicking higher on both days.

The stakes are high – President Trump’s next set of sanctions on China are set to go into effect on Tuesday next week.

But despite the tough stance taken by both sides recently, there’s reason to think a deal could be made.

This could continue to drive markets higher.

Here’s what to look for…

When Robinhood launched its mobile app with zero-commission stock trading in December 2013, the demand was so high, there was an extensive waiting list to join.

Today, the company is practically a household name. Some other so-called “FinTech” startups have joined them, chief among them SoFi, the student-loan refinancer out of San Francisco.

But when it was just startups offering zero commission, it was easy to ignore. At first, these were small companies, without an established customer base, and with apps that appealed mostly to younger people.

But last Tuesday, on October 1, the field got a lot more crowded. That’s when broker giant Charles Schwab Corp. (SCHW) announced that starting the following Monday, October 7, it would charge zero commission on all domestic stock and ETF trades.

Schwab has 12 million customers and manages $3.7 trillion in assets, so the company’s October 1 announcement shook the financial industry.

Meanwhile, stocks of these brokers took a tumble, with Schwab falling more than 12% just over that trading day: 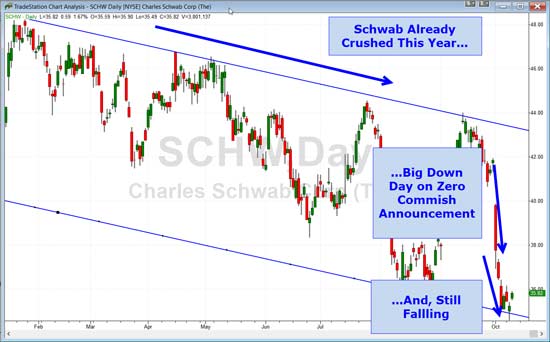 Now, for us traders, paying less in commission is always good. But as is often the case in life, there is no free lunch. What the brokers lose on commissions, they’ll make up in other ways.

So before you leave your old broker to jump headfirst into a zero-commission offering, here’s what you need to know…