I hope you’re all having a great weekend! Before we get into another great week of trading, I want to bring you a quick market update video to dispel some of the false narratives I see floating around out there.

With just about anything where statistics are involved, the way they are presented can be made to convey two very different stories.

And the recent coronavirus outbreak is no exception. You’ve likely seen some very scary charts in the news that purport that cases and deaths of coronavirus are on a parabolic rise. Don’t buy the hype designed to keep you glued to your screen and reading doomsday articles.

In today’s market update video, I’ll be following up on some data I presented earlier this week that shows what’s really happening with coronavirus infections, and why you shouldn’t buy into the panic you’re being sold.

The market knows the truth of the matter, hitting all-time highs in the face of coronavirus, tensions with Iran, impeachment, the Iowa caucus, and more. I’ll show you what’s behind the market’s continued drive up, and what you should really be paying attention to.

Last year, I joined the Advisory Board of the National Institute for Cannabis Investors to offer my technical analysis and experience to traders and investors interested in breaking into this exciting new space.

Unfortunately, for many investors, that excitement has dimmed in recent months.

Anyone that has even had a passing interest in the cannabis industry knows what a tough time the last year has been.

To be more succinct, it’s been a downright bloodbath.

While everyone has been so focused on the massive losses in the cannabis industry over the better part of the last year, what’s getting lost in the hysteria is that there is light at the end of the tunnel.

What you have to keep in mind is that the entire cannabis industry is still very new, relatively speaking. Most new industries have gone through their fair share of growing pains before the major players emerged to make huge profits for not only themselves, but their shareholders as well.

In fact, the Harvard Business School did a fantastic study on this “life-cycle” of industries, which they dubbed the Consolidation Curve. It outlines the four stages of consolidation that all industries go through once they are created or deregulated. 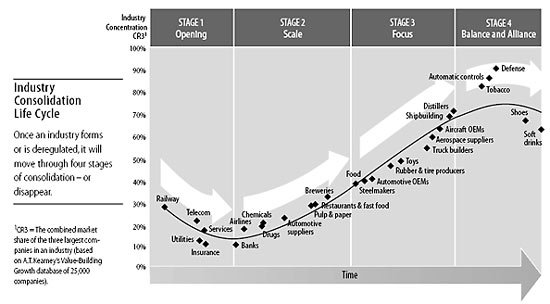 In Phase 1, we see the early movers emerge and immediately begin to grab market share, followed by hundreds of smaller companies all vying for a piece of the pie. This is by far the most volatile phase of any industry’s life-cycle, where huge price swings can occur on even the smallest bit of triumph or adversity.


And unfortunately for investors that got into the cannabis space in early 2019, the price swings since around April have mostly been down.

The downturn cost executives their jobs, shareholders huge amounts of money, and thousands of employees their livelihoods as scores of companies were forced into layoffs or even went bust.

The disappointment in the industry, once heralded as “the next gold rush,” is palpable. Just look at the majority of headlines on the subject. Most would have you avoiding cannabis investing like the plague.

But there is hope yet for the cannabis industry. Instead of wallowing in despair – as most news on the industry seems to these days – look instead to the future…