Editor’s Note: Today, Chris is talking about short squeezes. This technical term typically means that a stock is heading higher. But they’re useless unless you know the stock is about to pop. That’s why he’s telling you how to predict a short squeeze – and revealing five stocks about to rally on one…

“Turn those machines back on!”

Mortimer Duke was in a fury when he screamed these words near the end of the 1983 film, Trading Places, as his brother lay on the floor suffering what appeared to be a heart attack.

Why was he so enraged? He was the victim of one of the best-known short squeezes in history.

Every time I watch that movie, I find myself yelling at the TV screen. Because Eddie Murphy and Louis Winthrope III’s characters, like most people, didn’t know that you can actually use a short-squeeze to your advantage.

You get the angle here, yes?

Short squeezes follow the simple rules of supply and demand. They occur when there is a lack of supply and an excess of demand for a stock, and it typically causes a fast and aggressive increase in the share price.

A short squeeze happens when short sellers – those who are bearish on a stock – are forced to “cover” their losing positions on a stock. This leads to an unusually high increase in buying volume, driving the stock price up.

Typically, a short squeeze is triggered when a stock’s price has rallied to a point where short sellers begin to feel the pressure of margin calls against their accounts. Sometimes it’s even simpler than that, and short sellers decide to simply cut their losses and get out as the stock moves against them.

In an ironic twist, “getting out” is done by buying shares of the stock that they were betting against by holding a short position. Even more ironic, many times, the stock is trading with increased volume during these short squeezes.

This means that the short sellers must fight to get the stock as it accelerates higher – just like the trader fighting his way into the pits in Trading Places.

A move that generates big profits for those of us that can find the short squeeze before it happens.

Today, I’m going to show you how to find these short squeezes – plus, five stocks about to hit their own short squeeze rally – so that you can be on the receiving end of those profits…

How to Find a Short Squeeze – Before it Happens

Step One: I use database models to find the potential squeeze by filtering the biweekly short interest report from the exchanges to find companies with unusually high short interest.

Step Two: Find stocks within the high short interest list that are trading in a strong technical trend.

Next, is the 20-day moving average trending higher? If so, the stock is now at the top of the list for potential short squeeze candidates. That’s because the rising 20-day tells me that the stock is accelerating to the upside – a sign that the short sellers are now sweating as their losses mount.

This combination of the technical strength combined with the short interest is what forms a short squeeze situation. But you need a trigger price – the price where the stock takes off as the shorts run to the market to close their losing positions.

Using analysis of the recent price activity, support, and resistance, as well as potential for new highs, we can identify a “trigger price.”

This is the price where the shorts are likely to cave in and begin to cover their posing positions. This is also the tipping point where the stock begins what I call its F.A.R. (Fast, Aggressive, Right Direction) move.

And that’s the move that garners big gains for you.

The table below identifies five stocks getting ready to surge higher as they near their short squeeze trigger price. For reference, there are currently more than 190 stocks on this list. It’s a target-rich environment for trading right now.

Want to see a short squeeze in motion, just to get a feel for its potential? Look at the chart of Amyris Inc. (Nasdaq:AMRS) below.

This stock has been on my short squeeze alert list for the last week as shares started climbing towards their trigger price of $3.50.

Earlier this week, the stock breached that price, and volume started to pick up. That’s a sign that the short sellers are starting to close their positions as their losses grow.

Sure enough, the stock went through the roof on Wednesday on heavy buying volume. Then a rest on Thursday – and today, the stock has rushed another 20% higher.

All-in-all, this stock saw a total of more than 45% returns this week as the short squeeze engaged. 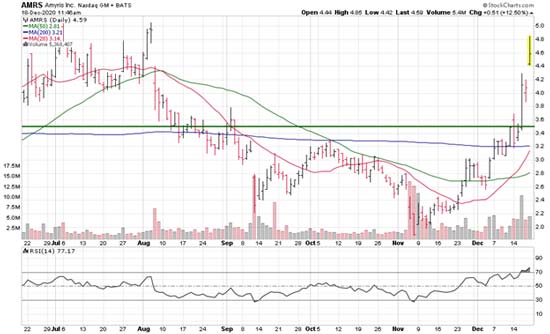 I know what you’re thinking: “So what, CJ, that trade has already happened. Where’s the next trade like this?”

Take a look at that table above – we have four more picks just like it.

First Majestic Silver Corp. (NYSE:AG) is a silver miner. And by now, you know how I feel about silver.

The fundamental story is simple. Silver is set to move higher as Congress finally gets some form of fiscal stimulus finalized. Traders have been waiting for this to happen, as silver has become a popular hedge against the weak dollar, which will go lower with more stimulus.

AG is in the process of breaking out of a trading range that has held it captive for the last four months. This is probably part of the reason that the short sellers have been increasing their bets against the stock…

But that’s about to change.

The trigger price for AG’s short squeeze rally is $13. That’s the price where I am forecasting that the short sellers will start coming into the market as buyers to close their losing positions. And that, of course, give the stock fuel to drive to a target price of $15.00. A quick 15% gain!

This list of short squeeze stocks has always been a valuable trading tool in my arsenal. And whenever I believe these stocks have become ripe and ready for an option trade, I’ll sometimes send a detailed recommendation to my Strikepoint Trader readers.

A couple weeks ago, one of my recommendations gave readers the chance to make 100% in five days.

You can learn how to join that research service right here.

Have a great weekend, and stay safe,

1 Isolate the Market Data from the "Noise"❯
Today's real market activity is drowned out by analysts, media headlines, and commentary. The only way to get pure profits from the market is to focus on the pure data - not the hype. Chris's pure data approach does just that to deliver profits.
2 Analyze the Data❯
Chris will walk you through the somewhat complex "cause and effect" relationship of market data using his unique Behavioral Valuation approach. This approach compares technical trends, correlations, and investor expectations.
3 Avoid the Crowd❯
Make sure that your investment decision doesn't follow the crowd. This is a single, simple step to increase returns. Chris provides you with time-tested strategies that turn your unique data analysis into consistent profit opportunities.

"I made 99% in one week on SunPower after investing just $1,138. I feel relieved and less stressed now that I have extra spending money. Thanks so much for all your winning trades!" - Rayna Nord, Boulder, Colorado

"I put down $1500 and made 180% in three days. I'm going to reinvest this money to make even more for my retirement. This is an awesome service about everything including market-making news events, how to read charts better, how moving averages work, how to set buy and sell orders, and getting all of my questions answered. Keep up the good work!" - Marc Lyons, Toronto, Canada

"I made 101% on REAL in two days! I'm going to use this money to reinvest in additional trades. The Money Map Press group has me on track for $100,000 for the month. Keep picking the winners! Chris's services have given me numerous opportunities with the additional cash I've received with winning trades this year." - Lucas Danielson, Martinsville, Virginia

"In five days, I made 115% on Blink Charging Co. I really like your research and option plays, and I have a real good winning percentage with your services. I am totally reliant on your knowledge and expertise, as I'm still trying to learn as much as I can about how trading works, from charts to trends, momentum, and day trading. Thank you very much Chris for all of your hard work. I want to be able to find winning stock and options trades!" - Anthony Marsden, Savannah, Georgia