Markets Are Ignoring the Headlines - Here's Why You Should Too | Straight-Up Profits
Meet D.R. Barton, Jr. ❯
The Complete Guide to Trading Options.

I was in an interview on Cheddar TV two days ago, and I was asked a strange question. Cheddar is the live streaming financial news network that calls themselves “post-cable” news. The question: “How can investors approach market volatility due to geopolitical risks?”

What I didn’t do was correct the host and say that markets aren’t very volatile at all. That would have been bad form. But this chart shows the current reality on volatility: 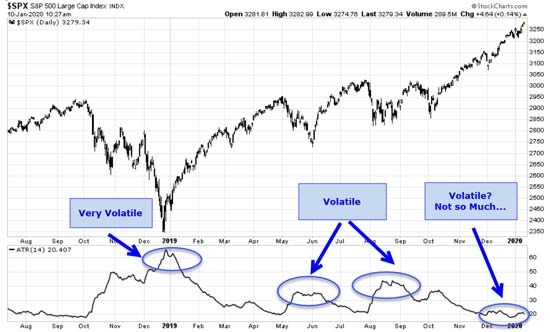 The lower line is the Average True Range – an indicator that represents how “jumpy” the market has been acting by measuring how big the daily moves are. In times when big daily moves are happening, like December of 2018, the indicator jumps much higher, as you can see on the chart above. Right now, and for the last couple of months, it has been very muted.

I did respond to the question by talking about how markets are actually shaking off those geopolitical risks and moving higher. I likened current market conditions to those in 2005-2006 and late 1998-1999 when markets brushed off outside news and kept trudging higher.

And while Cheddar is better than most at not playing up the fearful side of markets, even they respond more to the headline than the effect the headline is having on the market. And that reality gap – the one between headlines and how the market is responding – is the exact tool I’ve used over and over in the past weeks to keep you focused on making money by buying the little pullbacks.

According to Big Media, there are so many things that the market should respond to – and the fact that it won’t is suspicious to them. From a headline perspective, the sky is falling and you should be selling everything and running for the hills.

After all, they say President Trump’s order to kill an Iranian general almost started World War 3.

Iran’s missile strike in response is just the beginning, if Big Media’s fearmongering is to be believed.

Not to mention every miniscule detail of Trump’s impeachment being covered as if it were a breaking news story of global importance.

As if any of that had moved the markets, or will change the fact that Senate Republicans will surely acquit him.

And then, of course, we had the frenzy about the inverted yield curve. This rare signal almost always comes before a recession, so the media have been all over it…

Not mentioning that the yield curve never stayed inverted long enough to qualify for those statistics to apply. And if it did, it still takes on average 14 months from that signal for a recession to begin.

When Big Media run out of other ways to scare you and keep you watching or reading, they default to the usual. “This is the longest bull market on record,” they have pundits say. “We’re overdue for a recession, so one must be right around the corner!”

This is nothing but fear and distraction. It’s another example of the reality gap between what Big Media is telling you…

And what’s actually happening, what you can actually act on and make money from.

So instead of worrying, here’s exactly how you can profit as the markets hit all-time highs…

The Central Bank Support and Trump are Good for Stocks

Look, some bull market has to be the longest one, by definition. We should be counting our lucky stars it’s the one we’re living through.

Just like all these other so-called “reasons” to be afraid, the market is shrugging them off.

As I’m writing this, the Dow just hit another record high.

What’s really moving the market is quite different. Most importantly, it’s the combination of the “Trump Growth Narrative” and the Fed (and other central banks) adding money supply to the system.

The market’s perception that lower taxes and fewer regulations under this administration will boost business adds enough optimism to keep markets going. And the increasing central bank accommodation keeps more and more money available, which then flows to where it’s being treated best – straight to the U.S. stock market.

And there’s just nothing happening right now to endanger that narrative. The business with Iran blew over (there was actually restraint shown by both sides), and the markets never priced-in a serious threat to the U.S. economy anyway.

Trump’s impeachment won’t end Trump’s presidency, because Republicans control the Senate. So that also poses no threat to the “Trump Growth Narrative.”

As for the record-long bull market and the inverted yield curve, those are just two datapoints amid a sea of signs that the economy is strong. Record-low unemployment numbers, progress in trade talks, and the global economy turning around – it all points to a stronger, not weaker, U.S. economy in 2020.

And that reality gap is hurting your ability to make the right decisions and profit from the market.

Now, there’s another reason to be bullish right now…

The Fed is Supporting the Market

One of the most powerful entities in modern finance is the Federal Reserve. And the Fed has repeatedly shown that it’s firmly in the stock market’s corner. For one, it lowered interest rates three times last year. And other central banks have been similarly accommodative.

The Fed has been injecting billions into the financial system to keep everything smooth. Across the globe, other central banks have been doing the same.

Just yesterday, on Thursday, the Fed pumped $83.1 billion into the “repo” market of short-term loans between banks. The day before, that number was $46.6 billion.

In fact, the Fed added $370 billion into the financial system from September to the beginning of this year:

Much of the same is true for The Home Depot Inc. (HD), a retailer “have” that’s had a stellar 2019. During the holiday season, focus tends to shift to retailers that offer products that are commonly gifted.

But with the economy strong, Americans optimistic about their future, and interest rates on home-improvement loans low, Home Depot will continue to flourish.

Buy both now to ride the market as it continues to ignore the naysayers.

Great trading and God bless you,